Riley Stearns’s Dual is a surprisingly thoughtful look at chronic illness inside a dark comedy about future with clones. Read all of our Sundance 2022 coverage here.

When we first meet Sarah (a marvelous Karen Gillan) in Riley Stearns’s light sci-fi film Dual, she’s come home to sit in her dark living room watching porn, only to be interrupted by her absent boyfriend (Beulah Koale, perfectly channeling a mediocre asshole) via video chat, who doesn’t even seem to want to be talking. It’s a great image of depression and disconnection. Sarah, we sense, much like Mr. Watanabe in Ikiru (Akira Kurosawa, 1952) (not that Stearns is in any way comparable to Kurosawa!), isn’t really living — that is, at least, until she finds out she’s going to die. Faced with certain death in an uncertain timeline, she decides to clone herself so that her loved ones, as it’s sold to her, won’t have to miss her so much: they can just replace her with her clone.

What we know, and which Sarah perhaps hasn’t admitted to herself yet, is that her loved ones pretty much suck: she should dump her boyfriend and her mother is an emotional vampire. So it’s somewhat unsurprising if heartbreakingly real when they decide they prefer Sarah’s Double (also Karen Gillan, more straight-backed and stiff) to Sarah. Without the burden of having to live Sarah’s life, the Double is not yet exhausted by the emotional labour involved with dealing with Sarah’s loved ones. She’s also not exhausted by illness, depression, and just life. The plan is that the Double will shadow Sarah to learn how to be her, and when Sarah dies, take over. But before long, she’s already stolen Sarah’s life.

When Sarah is informed that her terminal illness has gone into unexpected remission, she wants to get rid of her life-stealing Double stat. But Sarah’s Double has no plans to make that easy, filing a lawsuit to be allowed to continue existing instead of being ‘decommissioned’ as most clones are, if the original survives. In an act of Hunger Games-esque barbarism, the courts settle these suits with a televised duel to the death in one year, and so Sarah must train to kill her clone — a mission that gives her newfound purpose and a will to live.

Dual, Stearns’s third feature, is a step up thematically and structurally from his second feature, The Art of Self-Defense (2019), though it shares a lot of stylistic elements. Both films share the ethos that learning self-defense is the secret to building self-confidence and purpose, though I think Dual does this more convincingly. Both films use symmetrical shot compositions and sets to create an eerie off-kilter atmosphere; feature highly enunciated dialogue without contractions or informal phrases; and encourage a performance style of deadpan bordering on emotionless line delivery.

In The Art of Self-Defense, the stylisation helped to build character: it rendered the otherwise clueless and misogynistic Sensei (Alessandro Nivola) an air of sophistication and mystery, and it rendered the bottom-feeder Casey (Jesse Eisenberg) even more pathetic in his inability to connect with other people. In Dual, this stylisation seems more of an affectation of the director than the characters, but it does help to destabilise our understanding of this sort-of futuristic world in which certain strange things are taken as normal.

Like Self-Defense, there’s a low-key humour to the brutal violence of Sarah’s duel training. She hires a man (Aaron Paul) who specialises in training people to fight duels with their clones, who not only teaches her how to use weapons and become more spry, but also works to desensitise her to violent images. In one montage, he has her look at a series of photographs of dead people to identify their cause of death (Chekhov’s Cause of Death). In another scene, he sends her to a morgue to see the dead body of a woman with a similar build. When Sarah starts to struggle to pay for lessons, they do an exchange of services: his training in self-defense in exchange for her training in hip hop dancing, a hobby she took up to get in shape for the duel. One of the film’s funniest sequences involves one such hip hop lesson in his self-defense studio.

All of this makes Dual thoroughly enjoyable on a superficial level. But the film is also surprisingly thoughtful about the realities and structural challenges of living with and managing a chronic illness. If you’ve ever dealt with a chronic illness, you’ve dealt with the fear that maybe people would prefer it if they could get a version of you without the health problems and emotional exhaustion.

Sarah seemingly trades in her terminal illness for being plagued by her clone, someone she finds herself doubly responsible for financially: she’s still paying off the exorbitant loan to get the clone made, and in the one-year wait for the duel, she’s forced to pay support to the Double, as well. If you’ve ever managed a chronic illness, you’ll know that sometimes waiting for treatment (or a cure) — even if that treatment is something scary, like open surgery or a duel to the death — can be more expensive and/or exhausting than the solution. Navigating the medical system is riddled with bureaucracy and systemic issues, and though Sarah doesn’t face these with her medical condition, she’s constantly up against these barriers when it comes to getting rid of her Double.

Throughout the film, there’s also a running commentary about the emotional numbing and ambivalence of society. It’s just taken as a given that a duel to the death is a reasonable way to handle which clone gets to live — and that both clones can’t live. It’s seen as perfectly reasonable that people who supposedly love you would happily adopt someone who looks just like you and can imitate you — or the unspoken thing, do the emotional and physical labour you would have done — but isn’t you, without thinking twice. And the televised spectacle of the solution to which clone gets to live feels uniquely American.

So it’s kind of funny that the film is full of people putting on very, very bad British accents, and a bunch of people with various European accents. Every authority figure Sarah encounters, from her doctors to her lawyer, have British accents. And most people she meets in the street

are Finnish English-speakers; the film was shot in Finland, the only place that would allow them to shoot under COVID — which certainly raises questions about Finland’s COVID protocols. Add to this that Gillan, herself a Scot, is putting on an American accent, and you end up with a bizarro world which is uniquely American and yet full of people that don’t really sound American. Weirdly, it works. It’s just another way to destabilise our understanding of the world, which helps create the film’s eerie tone.

We want to make sure you don’t miss out on any opportunities to watch Dual at virtual cinemas, VOD, and festivals throughout the year. 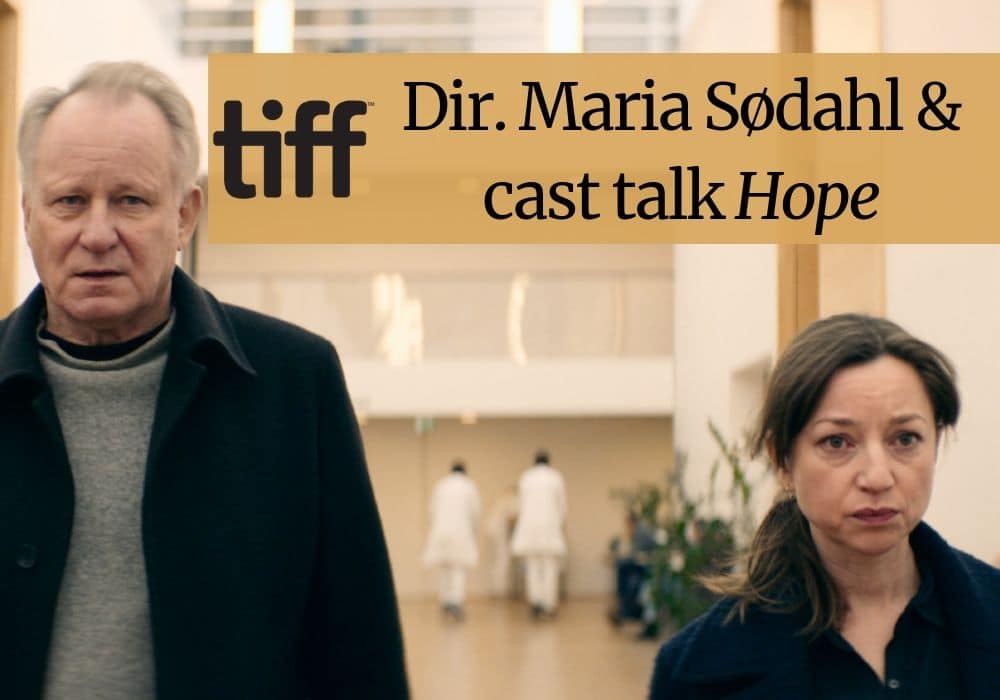 Newer Post »
Happening looks at the culture of shame around abortion