Alison Maclean discusses the making of her film The Rehearsal, from adapting Eleanor Catton’s novel, to finding her cast, to rehearsing the film.

How can you turn Eleanor Catton’s brilliant, wry, sardonic novel The Rehearsal into a film? Its metanarrative is entirely dependent on the medium of literature,  never quite clear if what we’re reading is real or part of a play. Perhaps more importantly, the novel’s nuanced exploration of girl sexuality in all its shades, discomfort, and confusion, relies so much on what isn’t said or seen — what’s between the lines.

For director and co-adapter Alison Maclean, adapting The Rehearsal for the screen meant keeping the book’s skeleton and some of its ideas, but throwing much of its plot and structure out the window. Maclean and her co-writer, Emily Perkins, read the book a couple of times and loved it. “We talked about what we loved about it and initial ideas of what the film could be, themes, and marked our books up, but then put the book aside. We started inventing. In the first couple of drafts, we didn’t look at the book at all. Once we had our structure, and we’d invented a lot of our new characters, plotted the film out, and had an idea of the ending, we went back to the book to find details and rediscover moments we loved.”

We started inventing. In the first couple of drafts, we didn't look at the book at all.Click To Tweet

They began by shifting the focus from a saxophone teacher and her teenage students to one of Catton’s subplots: new drama student Stanley, who starts up a romantic relationship with the much younger Isolde. Maclean explained, “There are three teachers and three worlds in the book: the girls who play saxophone, and their teacher, and the drama school. You couldn’t do all those storylines. You had to simplify. I thought it was more exciting to go with the drama school. That’s how we arrived at Stanley (James Rolleston) being the main character. Stanley is really the character who has a choice to make and changes the most.” Consequently, the saxophone teacher morphs into Stanley’s hard-ass drama teacher (Kerry Fox).

Both the book and the film pivot around a story of a teenage girl, Victoria, who had a sexual affair with her tennis coach (in the novel, a teacher). This part of the story was key to what drew Maclean and her co-writer to the book. “Emily and I really loved the way it looked at young people and adult authority figures — teachers, parents, coaches. We’ve both experienced both sides of that equation, being a teacher and a student,” recalled Maclean.

We thought it was interesting that you can’t make an absolute moral judgement about it.Click To Tweet

“We liked the idea of looking at the power dynamic between those two groups,” Maclean continued. “It’s not black and white about these things. Even the relationship between Victoria and the coach, it’s many things. It does have a predatory side, and it also has this impossibly romantic, first sexual-love experience side. But obviously, the age difference makes it suspect. We thought it was interesting that you can’t make an absolute moral judgement about it.”

In the book, we mostly learn about this affair second-hand, through the eyes of Victoria’s sister, Isolde (Ella Edward). In the film, the focus shifts to Stanley’s drama class, where he and his group decide to create a play based on the story of the coach and teenage girl. As the students experiment with “different ideas and even different genres, directions they could go, from realism to something very stylized or choreographed,” Maclean aimed to explore the different sides of the relationship between Victoria and the coach.

The film is at its best, though, in certain moments between Stanley and Isolde, as they embark on a romantic relationship. Because Stanley is 18 and Isolde is 15, in the eyes of the law, what he’s doing is equivalent to what Victoria’s coach did. But Maclean leaves room for tenderness, for the way these two are on a more level playing field, and for the ways in which Isolde is ill-equipped to deal with her burgeoning sexuality.

You see it all there on her face. It’s really a naked scene.Click To Tweet

In my favourite sequence, Stanley asks Isolde to let him film her. What we know and she doesn’t is that he’s thinking about ending their relationship because he’s too cowardly to tell her about the play he’s doing. As he scans up and down her body with his camera, she seductively offers, “I’ll show you more if we go somewhere private”. So they do. And as they start to undress in the bedroom, Maclean finds the perfect balance of showing us Isolde’s curiosity, as well as how she might not be quite ready for what she’s getting into. Maclean added, “You see it all there on her face. It’s really a naked scene.”

When designing the film’s visual style, Maclean took inspiration from the book. “The book has a heightened, stylized quality,” noted Maclean. “We liked the idea that it had a certain formal, almost artificial quality, that perhaps has a moment of theatre and the proscenium arch. At the same time, it’s married to an acting style that is hopefully quite organic and instinctive and not theatrical. Obviously, it’s theatrical when they’re rehearsing. But in the life scenes, it’s more observed, lived behavior.” Focusing on the acting students and their rehearsal process allowed Maclean to use “the rehearsal as a metaphor for the process of becoming an adult and the time of transition when you’re experimenting with possible ways of being, possible selves.”

The book has a heightened, stylized quality. We liked the idea that it had a certain formal, almost artificial quality, that perhaps has a moment of theatre and the proscenium arch.Click To Tweet

In collaboration with her director of photography, Andrew Commis, Maclean decided that “the frame is a kind of an arena.” They wanted “it to have a little bit of distance. Within that, there would be room for spontaneity. We found ourselves gravitating toward formally composed shots, either to camera or using the edges of frame.”

Maclean’s young and diverse cast, a mix of experienced actors and non-actors, form an impressive ensemble. Every student in the drama class feels like a real and distinct character. While some of the characters, like Stanley and Isolde, were already fleshed out on the page, many of the young actors were largely responsible for defining their characters themselves. Maclean elaborated, “Some of the kids in the group were basically playing a version of themselves, and they gave themselves their own name. Some of them, like Alice Englert, Jane Campion’s daughter, who played Thomasin, she and I talked a lot. She’s a writer-director herself so she had a lot of ideas, and we incorporated those into the character. She had a really definite idea about how she dressed, her family background, what she’s interested, and things like that.”

But even the characters who were more heavily scripted really came alive through the actors’ preparation and improvisation. Maclean explained, “Someone like Kieran Charnock, who played William, [one of Stanley’s classmates in the film,] a lot of that was on the page [of the script]. But he went very deep into that character, in a very method sort of way. He filled notebooks as the character, walked around as the character, read what he thought he would be reading. So it was an intensive prep process for him. But he was also very good at improvising. A lot of the lines that he says in the film are things that weren’t scripted.” Similarly, in Stanley’s first scene at drama school, where he’s doing an acting exercise, much of that scene was unscripted, with Maclean encouraging Fox to push his buttons and challenge him.

We knew we had to create this feeling of a group that had a kind of closeness, that they almost had to experience the progress of a year within a week, which was sort of daunting.Click To Tweet

To prepare the cast for the rigorous shooting schedule and the improvisation required of them, “We had a two week rehearsal. We had a week with Stanley and Isolde, just the two of them, which was about creating the intimacy between them and going through the main scenes. The second week, we brought this group of 15 together. We knew we had to create this feeling of a group that had a kind of closeness, that they almost had to experience the progress of a year within a week, which was sort of daunting. We did a little mini-drama school. We had a very intensive week of all the things you do at drama school, whether it’s telling the most embarrassing thing that ever happened to you, stories or games or trust exercises, or working on scene work together — a lot of physical work.”

One of the goals of the mini-drama school was to encourage “each one of them to come up with backstory or facts about their character, to fill in gaps and develop relationships and friendships. We did a photograph where they had to arrange themselves in a line according to their own perceived status in the group. [At the beginning,] James, who played Stanley, was second to the lowest status, he considered himself to be. The only person who was below him was young to him. And then, we did it again at the end of the week.”

Putting the cast through the ringer in rehearsals was perhaps the best preparation for what was Maclean’s favourite scene in the book. In one drama class, Stanley pretends to be his father. After a timid, false start, he finds the bravado and self-confidence to just go for it, and it’s the first time his teacher really sits up and takes notice of his talent.

Maclean recalled, “We worked really closely with the actor who played Stanley’s father. We did the scene where he has lunch with his father first, and we did a lot of rehearsing. We recorded those rehearsals with his dad. James would practice trying to find the physicality, trying to find the physical confidence and authority. That became the starting point for him, that kind of swagger and not giving a fuck, rather than trying to mimic his voice or his crazy laugh.” It’s an electrifying scene, which puts into practice Maclean’s goal of bringing “the process of learning to be an actor to life in a film.”

The Rehearsal will be distributed by Mongrel Media in Canada, but it is still seeking a U.S. Distributor. The film will also screen in the NYFF Main Slate, as well as the Vancouver International Film Festival. 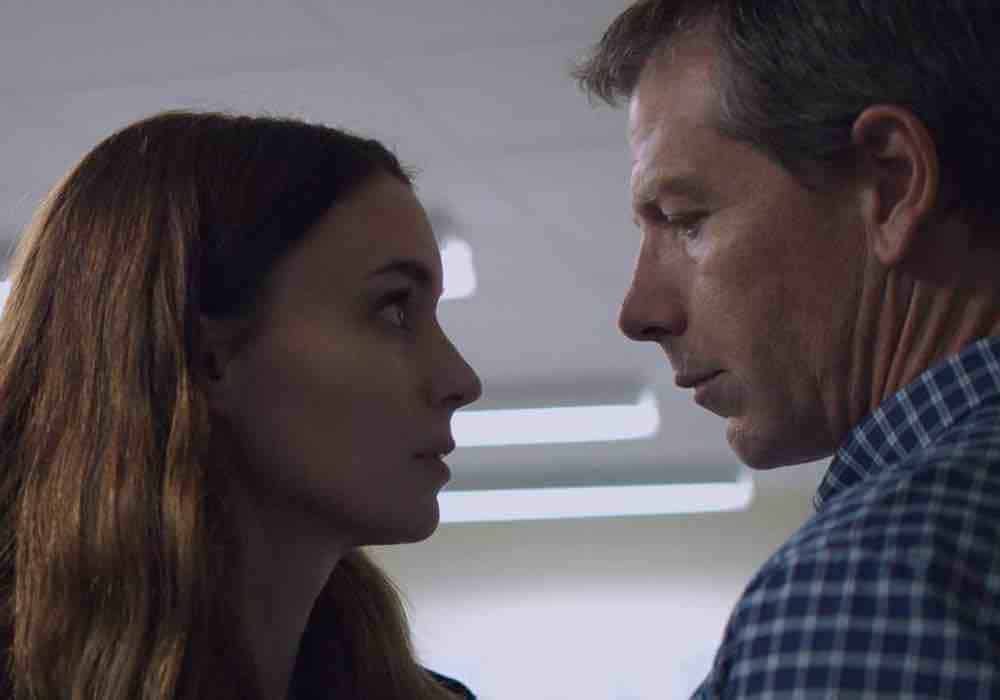